I have the privilege to feature the awesome Perdita Cargill on my blog today. She and her daughter wrote an awesome, funny YA novel, WAITING FOR CALLBACK, that reminds me of the humor in ANGUS, THONGS, & FULL FRONTAL SNOGGING. I  highly recommend you give this book a try. If you’re in the UK, you can purchase it here: Click here  Perdita’s post today is about social media, publication, and all the emotional swings that entails. She’s a fantastic writer, and what she has to say really resonated with me. I hope it does for you as well.

And without further ado, I’ll turn the microphone over to Perdita!

It’s been a couple of months since we published our debut teen novel Waiting for Callback and now I’m going to do the whole Wise Elder thing and tell you all about me and Twitter, publication and beyond. 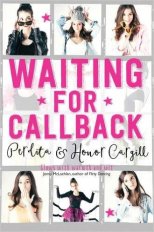 I’ll gloss over the early days. Suffice it to say that I’d barely heard of Twitter before we signed a contract. Honor (my co-writer) maintained – as firmly as only a seventeen year old talking to her mother can maintain – that she didn’t ‘get’ Twitter and that a division of ‘labour’ would save me from making a fool of myself on Instagram and Facebook. I thought this was a good argument but I had yet to realize the potential for making a fool of myself on Twitter.  It took me a good six months to begin to master when to lurk and when to tweet. Ok, maybe not ‘master’, the shame of the unreciprocated intervention… But I did love talking about people’s books and I did start to make friends (oddly including a significant number of book-y people who had a deep and inappropriate appreciation of Poldark). Also there were puppy accounts (I never turned to the cat accounts, not even on dark days, because I had standards). There was @broodingYAhero.  I was getting the hang of it. But this blog (confessional piece) is about what happened round the time when our book was coming out.

Reader it was not my finest hour.

I’m pretty sure that most people had muted me before the first copy was on the shelves.

I consoled myself with the reflection that most people probably still had me on mute.

Well they would if they’d unmuted me.

I could talk about them.

In retrospect I probably went a little mad. I like to think I won’t go quite as mad with book two (It’s probably a good thing that I don’t know the exact PD yet). If I do please do tell me. Stage an intervention if necessary. You can find me on twitter @perditact.

Thank you so much, Perdita, (and I am so so sorry this post came in a wee bit late. Life conspired against me finding time to blog)

Never trust a girl who can read

A love affair with books and storytelling

Life, one written word at a time.

A Little Bookish, A Little Writerly

The exploration of worlds, the heartbeat of a new frontier.

King of Dragons and Fantasy Author

Leaping to your bookshelves in 2015!

Fumbling by Leisure, Singing to Cake

The Art and Craft of Blogging

The latest news on WordPress.com and the WordPress community.