This week, I’ll be discussing the YA contemporary novel, SONG OF SUMMER, by Laura Lee Anderson. (Purchase on amazon here.)

It’s a really sweet novel, told in alternating POV of the couple, Robin and Carter. In doing so, the author is able to let the reader into the minds of both parts of a developing summer romance. We feel their instant attraction, their hesitation at trusting each other, and the moments when they’re totally heads over heels.

In other words, it’s adorable. The book is also a fascinating look into how people communicate with each other. Teens, especially, are full of secret beliefs and carefully constructed lies that they refuse to tell anyone, even someone they’re dating. Song of Summer’s main couple, in fact, risks their relationship with the number of things left unsaid.

Robin is a small town musician and a waitress during the summer. Music flows in her veins. It’s everything to her. Carter is a big city cool kid (with a motorcycle!) on vacation at the fancy Chautauqua Institute, a mile away from Robin’s home. He’s also deaf.

Despite their differences, they find something that they’re sure is true love. However, like all summer romances, there are things that may tear them apart. I flew through the second half of the book, wondering how it ended.

So, that’s the plot in a nutshell. But I also wanted to discuss another aspect of the book that I LOVED. 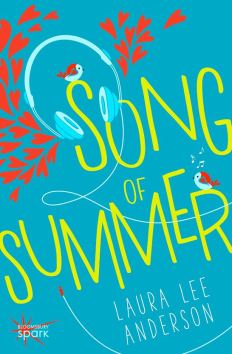 The cover was done by Jenny Zemanek.

It’s adorable, and so perfectly on-point for a beach read. The font is quirky,and it’s a fun, unique color set , too. As much as I love pink, it’s really nice seeing YA contemporary get covers that don’t look like Hallmark Valentines Day cards.

And here’s the cutest thing about the cover. As I mentioned, the book features a love story between Carter, a deaf teen, and Robin, a musical one.

Look at the bird at the top of the book.

He’s inside the headphones. He’s not singing. In fact, one might say, he can’t hear.

And the other bird?

She’s facing him, outside of the headphones, and singing! Isn’t that the cutest thing you’ve ever seen? I’m really hoping this trend of illustrated covers continues, because they’re beyond adorable.

If you’d like to win your own copy of this book, along with an awesome LUSH bash bomb, check out my giveaway!

One thought on “SONG OF SUMMER: Book Review”

Never trust a girl who can read

A love affair with books and storytelling

Life, one written word at a time.

The exploration of worlds, the heartbeat of a new frontier.

Leaping to your bookshelves in 2015!

Fumbling by Leisure, Singing to Cake

The Art and Craft of Blogging

The latest news on WordPress.com and the WordPress community.